The Scent of Summer 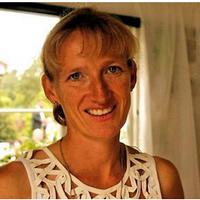 Green Island Gardens is 20 acres of private gardens, open for the public to visit in Ardleigh near Colchester, Essex. Professionally designed by its owner Fiona Edmond, the land is laid out as a series of structured gardens displaying a huge range of unusual trees, shrubs, perennials, and bulbs - 'A Plantsman's Paradise'. One of the best gardens open to visit in Essex. Featured in Country Living February 2019, and recommended in Great British Gardens 2019 and Essex Days Out

More by this Author 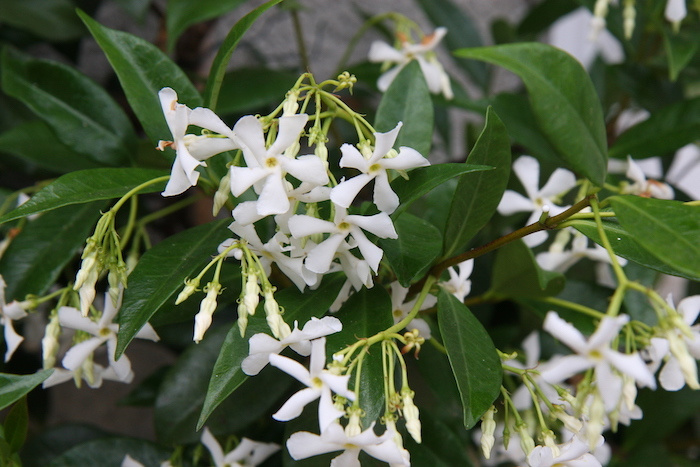 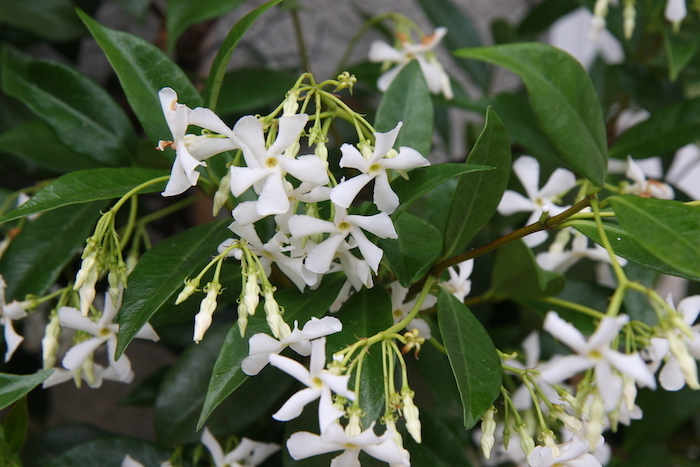 As I write this sitting at my kitchen table on a balmy summer evening the sweetest most heavenly scent is wafting in through the kitchen windows and doors from the climber I have planted on both sides called Trachelospermum jasminoides.  As visitors approach the entrance to the gardens next to my kitchen I would be a rich lady if I had received a pound every time someone had mistakenly said “’Ooh let’s smell this lovely jasmine”.  They could be forgiven for being mistaken as the white flowers do resemble those of jasmine and certainly have a scent that is similar, albeit sweeter and even more intense.

That is where the similarities end. Trachelospermum is an evergreen climber and will self cling. The flowering period is longer than the few weeks of jasmine and it has an extra season of interest when the leaves turn orange/red in autumn and winter when planted in a sunny location. In addition it can be pruned back with shears or secateurs as required to keep it in check without sacrificing the flowers the following summer. Jasmine makes an untidy mass of dead looking vertical branches up its support and then produces a mass of green growth on top of the old wood each year amongst which the flowers are borne, often too high for people to enjoy. It needs an experienced gardener to keep it in check and looking tidy. Being deciduous the autumn leaf drop of jasmine creates a mess and for six months of the year it is a mass of bare twigs to look at.

For the above reasons I encourage my clients to plant Trachelospermum instead of jasmine. To buy a plant in a garden centre or nursery will probably bee twice as expensive as a jasmine but think of it in terms of getting twice as much value for your money from the plant with its 12 months of interest. Trachelospermums can be grown in pots, just feed with a general purpose fertilizer in spring and water thoroughly twice weekly through the summer.

Some books and labels will state that Trachelospermum may not be fully hardy and for that reason should be grown on a south facing wall, or even in a conservatory. However here at Green Island I have never lost one despite successive winters when temperatures dipped to -15C. I grow Trachelospermums on walls facing every aspect and they flower equally well. Admittedly the ones in the sun colour better in autumn however the ones facing north flower a week or two later than those facing south resulting in an extended flowering period.

There are different varieties of Trachelospermum available. T.jasminoides has the brightest green glossiest leaves and whitest flowers, which release their scent prolifically in the evening. T. asiaticum Majus is a neater more compact variety which has cream flowers with a yellow centre which blooms a week or two earlier than T jasminoides. It also colours better in autumn. There are variegated versions available but I steer clear of these as I am not keen on any plants that flower which have variegated leaves. In addition they do not flower as well as non variegated varieties. There is a variety with pink flowers newly available but I have yet to try this one. For me nothing can beat the heavenly scent of Trachelospermum jasminoides!

Your E-mail has been sent. We will be in contact with you soon.

Please refresh the page and re-submit the form.

SORRY
Your content caused an error and your email has not been sent.
Please remove any unusual characters and try again